We are a project team at Cornell University focused on data-driven solutions to relevant problems, and building a community of data science enthusiasts.

With this tutorial, you will learn how to analyze and forecast time series data using various statistical and machine learning models.

What is a Time Series?

A time series is a sequence of data observed over time. For example, at specific points in time, we can observe features such as the unemployment rate of a country, sales success of a product, or demand of a certain quantity. The key is that each of these variables varies with respect to time.

Analysis of temporal data allows us to obtain useful insights on how a variable changes over time (as in a univariate time series) or how it depends on the change in the values of other variables (as in a multivariate time series). This relationship can then be further analyzed for time series forecasting (extrapolation into the future), which has numerous applications for artificial intelligence and machine learning.

There are several open-source Python libraries we will use for time series analysis, some of which you may have seen before. These include:

Here’s a flowchart of some of these packages for reference: 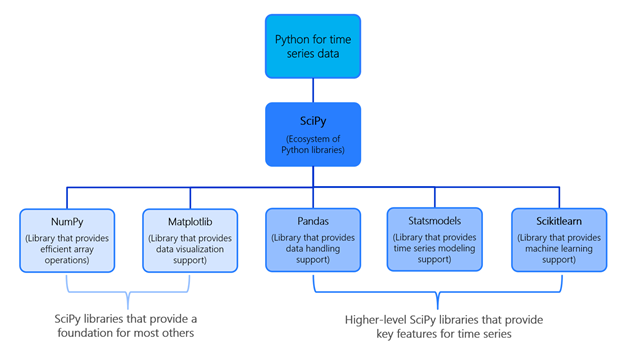 Basic Components of a Time Series

A time series is comprised of four basic components:

It is helpful to think of these four components as combining either additively or multiplicatively. An additive model suggests that these components are added together

while a multiplicative model suggests that the components are multiplied together.

This decompositional approach to time series provides a structured way to think about forecasting problems, both generally in terms of modeling complexity and specifically in terms of how best to represent each of these components within a given model.

However, you may not always be able to perfectly break down your time series into an additive or multiplicative model. Unfortunately, real-world problems are messy and noisy. A time series could consist of both additive and multiplicative components. There could be an increasing trend, followed by a decreasing trend. In spite of this, abstract models provide a simple framework by which you can analyze your data and explore ways to look at and forecast your problem.

Here are several universal terms we will use when discussing forecasting:

We have a few naive heuristics for simple forecasting:

This method is suitable for forecasting data with no clear trend or seasonal pattern. As we saw with the “Most Recent” method and the “Average” method, forecasts were dependent on some weighted average of the observed data (in the “Most Recent” method, all of the weight is given to the last observation, while in the “Average” method, all observations have equal importance). We often want some balance between these two situations: one where we can attach larger weights to more recent observations, but still significantly consider a window of recent observations when determining forecasted values. SES is one way to accomplish this.

In SES, the forecast at time $T+1$ is equal to the weighted average between the most recent observation $y_T$ and the previous forecast $ŷ_{T-1 \vert T }$. More formally:

where $0\leq \alpha \leq 1$ is a smoothing parameter. For the fitted values (one-step forecasts of the training data), we can similarly write them as:

for $t=1, 2, … , T$. We can use this recursive definition to write an expression for the forecast at time $T + 1$ in terms of all previous observations, namely:

How do we choose $\alpha$? In some cases, we can choose it in a subjective matter, specified based on previous experience. However, a more generally reliable and objective approach is to estimate it from observed data. Just like in many machine learning models, this involves minimizing a loss function applied on the training data. So we can obtain a good value of by choosing the one that minimizes some loss function (generally, the sum of the squared errors).

An unfortunate downfall of SES is the “flat-forecast” function. In other words, all forecasts take the same value, equal to the last level component, namely:

for $h=2, 3, …$ Hence, these forecasts are only suitable if the time series has no trend or seasonality, but can also be useful as a baseline.

Often, our time series data has inherent trend and seasonality, and SES tends to perform poorly on such models. At a high-level, Holt-Winters applies seasonality three times:

We also specify the length of a seasonal period ($s$). Additionally, we can specify whether or not to explore seasonality as additive or multiplicative in nature.

For stationary time series (i.e., no trend and seasonality), an autoregression sees the value of a variable at time $t$ as a linear function of the values preceding it. Mathematically, this can be expressed as:

In the above expression, $p$ is the autoregressive parameter which indicates how many time steps to look at previously. $\epsilon_t$ is white noise, meaning that errors are independent and identically distributed (i.i.d) with a normal distribution that has mean 0 and constant variance.

The value of $p$ can be set using various approaches, but one common method is to look at the auto-correlation function (ACF) plot or correlogram. This graph is a visual way to show serial correlation in data at various lags. The statsmodels library allows us to visualize the autocorrelation plot:

For stationary time series, a moving average model will, similar to an autoregressive model, model the value of a variable as a linear combination of previous information. However, rather than using the values of the observations, a moving average will use the residual errors. Specifically:

where $q$ is the moving average parameter, $\epsilon_t$ is white noise, and $\epsilon_{t-1} … \epsilon_{t-q}$ are the error terms at previous time periods.

The value of $q$ can be set using various approaches, but one common method is to look at the partial auto-correlation function (PACF) plot. A PACF plot is similar to an ACF plot in that we look at correlation values across different lags, except that in a PACF, each partial correlation controls for any correlation between observations of a shorter lag length. Here is how we can plot a PACF using statsmodels (note the code is very similar!):

You May Also Enjoy

How biased are text-to-image models?

A summary of work pertaining to a past / continuing CDS Project; Bias in ML

Wisdom from the 2022 CDS graduating class.

This tutorial will contain content relating to creating your own data science project! Often, topics pertaining to beginning projects, such as formulating a question and finding the right data sets can be difficult. We hope to provide insight to get you started.

A Beginner’s Guide To What It Is, How To Implement It, and Why It Matters.